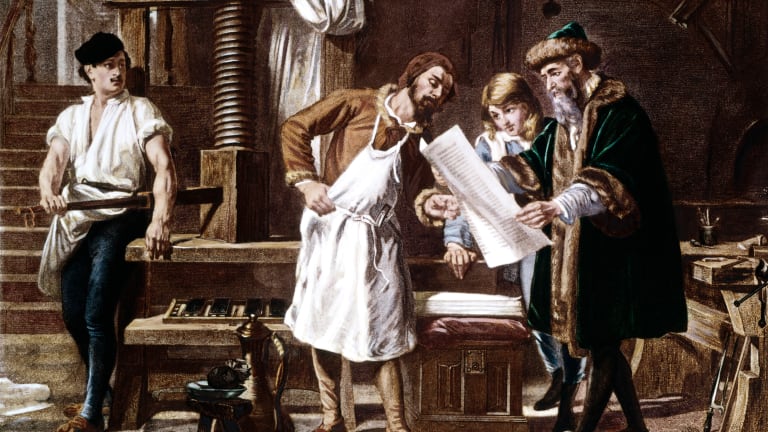 Hard to believe now, but there was a time when books were all written by hand, came in large and bulky volumes available only to the very few – and very rich. Imagine monks seated in their ‘scriptorium’, hunched over their desks and with quill pens and brushes laboriously creating each detailed character to form a word, a line, a page…

Not the kind of thing you’d read on the plane and leave on the seat. Or on the beach, for discarding on the deckchair after closing the last page and the sun goes down.

The man who made that possible was Johannes Gutenberg, popularly credited with inventing the art of printing in the early 1450s. High praise, but for the wrong reason. Gutenberg certainly did not originate either the press or the printing process but was the first to implement the practical use of movable type.

His ‘42-line Bible’ of 1455-56 is renowned as the first printed book, but it was not the result of devotional saintliness. No, Gutenberg was a goldsmith by profession, and his movable type was put to much more pragmatic business purposes.

He saw that the potential return from mass-produced books, turned out quickly and cheaply, was a lucrative prospect. Movable type, coupled with adapting screw-type presses – as used by farmers in Europe – for printing purposes, could be the lode seam to go with his craftsmanship skills.

These skills created durable letter blocks that could be used repeatedly, and although arranging the letters for each page could take an entire day, using the farmers’ screw-press meant that a page could then be printed as many times as necessary from the single day’s work.

Gutenberg’s vision of wealth from mass-publishing did not materialise – most of his life was spent in poverty – and it was left to others to profit from his inventions (as they still do). But that’s another story so let’s stay with his movable type for our purposes here.

First problem was that his letterforms were based on the Blackletter calligraphy that was used in monastic manuscripts. This limited the amount of text that could fit on a single page, creating longer books that required more time to set up.

This takes us back to where we began in an earlier instalment – with Bembo. Gutenberg had his vision of mass-production, but because of continuing with Blackletter, his books were still as large and unwieldy as their medieval predecessors.

The advance came around 1495 from another visionary, a Venetian printer called Aldus Manutius, who commissioned designer Francesco Griffo to cut a compact typeface that would still be easily legible at tiny sizes, enabling Manutius to produce small, affordable, and portable books for a burgeoning class of educated, literate people for whom reading was beginning to become an enjoyable personal activity.

The Bembo name comes from the first volume from the Manutius/Griffo collaboration – a small 1496 book by the poet and cleric Pietro Bembo. His eponymous typeface has been with us ever since. The modern version was created in 1928-29 by the British branch of the Monotype Corporation during a period of renewed interest in the printing of the Italian Renaissance.

It is now a hardy perennial of the bookface world, used in countless volumes and seen by millions of readers, not that they’d have known. There was a time when publishers gave typesetting and printing information in the preface pages of a book, along with publishing history and ISBN number. The overwhelming majority of readers probably never noticed, and even if they had, reading “This book is typeset on 9 point Bembo” would have been meaningless.

This publishing practice now seems to be dying out, and if most readers didn’t notice, the omission still pains typography geeks.

If readers did make the effort, they might have come also come across Jenson on the preface inscription, another enduringly popular bookface. Nicolas Jenson recognized that simpler letterforms would result in being able to fit more text on a single page, resulting in shorter books with faster setup times. Its history dates back to much the same era as Bembo’s, with Jenson’s 1470 creation of the first Roman typeface, based on Blackletter.

Cost-efficiency was not the only typographic challenge tackled by the first type designers. Readability of early typefaces wasn’t ideal, especially the italic style favoured for saving space. Enter William Caslon…

In 1734, he created a new typeface that included more contrast between strokes in each letterform. Now referred to as ‘Old Style’ type, these typefaces made letterforms more distinguishable from one another at a glance, improving readability.

A few decades later, John Baskerville took this a step further, creating typefaces with even more distinct letterforms and blacker than those of his contemporaries. Baskerville also made improvements to type, ink, and printing presses. His typeface design had its critics but it was revived in the 20th century, and Baskerville has since been hailed as “the greatest printer England ever produced”.

Readability is still with us as a determining factor in the choice of bookface. It defines the degree of ‘visual comfort’ a person experiences when reading lengthy passages or reading for long periods. Readability is dependent on legibility: how easily one letter can be distinguished from another, the spacing between letters, the height and thickness of letters, and the size of the serifs.

Reading a line of text printed in sans serif is more tiring on the eye. For this reason, sans-serif fonts should be reserved for headings or other limited uses. Just try reading a novel set in Univers or Helvetica!

Readability is therefore the essential requirement for a successful bookface. As well as those we’ve touched on, it is common to enduringly popular choices such as Garamond – developed in the 16th century by Parisian engraver Claude Garamond, and Palatino – released in 1949 and intended mainly for headings but becoming popular for book text (and still is).

The first digital typeface – Digi Grotesk – was designed by Rudolf Hell in 1968. Early digital faces and fonts were bitmaps – resulting in less-than-ideal readability at small sizes – but in 1974 the first outline (vector) fonts were developed, creating much improved readability.

The 21st century brought considerable advances in web options. In 2009, the Web Open Font Format (WOFF) was developed and added to the W3C open web standard. This development paved the way for widespread adoption of web fonts in 2011 when all major browsers finally adopted support for WOFF.

From Gutenberg to Bill Gates and beyond… graphic designers and book designers have never been so spoiled for choice. The centuries-old Bembo and Jenson live on, still right up there when it comes to popularity. And the still old but comparatively recent Caslon, Baskerville, and Garamond no less so.

Why then do we still come across typographical horror stories that are virtually impossible to read, or at best are hard work for the reader? The answer can only be that some folk should never be let near typeface or typesetting decision-making.

Like some who have a tin-ear for music, they have a tin-eye for reading matter. Music aficionados wonder how people cannot tell Bach from Schoenberg. Readers can only let out a sigh for those who seem never even to have seen anything in Blackletter or Bembo, far less tell the difference.